Some examples from a recent documentary by filmmaker Julie Romaniuk for her documentary “When We Sing…”. We had many discussions about which direction to take with the style, and in the end settled on an aged, light brown palette, using drops of watercolour as a visual motif. I received a rough cut of the opening music as a guide, and a final graded cut of the end credit song to work into the motion graphics. The end credits utilise layers of masking and bleeding to achieve the look. Another project where locking in the final stylistic approach was crucial. Over 30 lower third name and location supers were also created for this project. The director has so far received very positive comments about the motion graphics, which is great news. With film credits, it’s vital to have a cohesion between the graphics and the overall mood and tone of the film, I believe this was achieved. More information about the documentary can be found at facebook.com/whenwesing 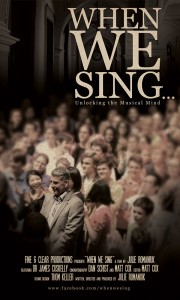